Finally after months of waiting the day has arrived when i go to see what has been called ‘the best tribute band in the world’….. 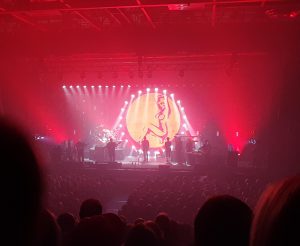 ….. and boy they did not disappoint.  From the very start the whole band were pretty much pitch and note perfect.

The 1st section of the show they ran through all the more memorable songs accompanied by an amazing light show.

The video projection and light show were 1st class and really added the finishing touch to the whole experience.

The show flowed flawlessly from one classic to another.  The crowd went wild when they heard the intro to another brick in the wall part 2 and suddenly a massive puppet of the teacher appeared to the right of the stage.

After a brief intermission they returned with some of Pink Floyd’s older songs which was a pleasant surprise.

And then after what seemed like no time at all they were playing the final song and were taking their bows.

The audience quite rightly gave them a standing ovation and then as the lights went out the audience still carried on clapping and started to stamp their feet and the band returned to play a  amazing encore of “comfortable numb”.

I had never seen then before and i was totally blown away close your eyes and Pink Floyd are playing on stage, open them and you have the absolute next best thing.  My friend who i went with had seen them before and even he said that this was the best he had ever seen them.

Suffice to say i am looking at seeing them again next year, but at a larger venue either Glasgow or Newcastle.

So one final word to the Australian Pink Floyd would be …. shine on you crazy diamond’s.