Intros are a necessary step in everyone’s coding journey.  Usually you’ll start with ripping music or character sets and designing a screen to say who ripped it and then next logical step is to design and code your own intro.

This is where you take your first steps into scrollers, screen splits, raster bars (sometimes) and you start to learn about raster time and that the C64 does not have an unlimited amount, so you have to carefully start to plan where things are triggered on the screen, maybe play the music in the area you have assigned a large scroller or logo.  This is the point where everything is going well, then you add someone and everything starts to judder and stutter when you run it.

So if we look at my first intro we can see that it is very static, the only thing happening is the colour scroll and the text that flash’s on and off which looking at now happens far too quickly..

If I remember correctly, this was the 1st time, I had managed to have some fairly stable raster bars a 3 colour logo (might have also been drawn by me) and a none started character set with music all on the same screen.  Andy J wrote the memory transfer routine used when you press space, he was a great friend and tutor in the early days when I was learning to code.  It’s good to have someone that can teach you when you need it, or at least point you in the right direction. 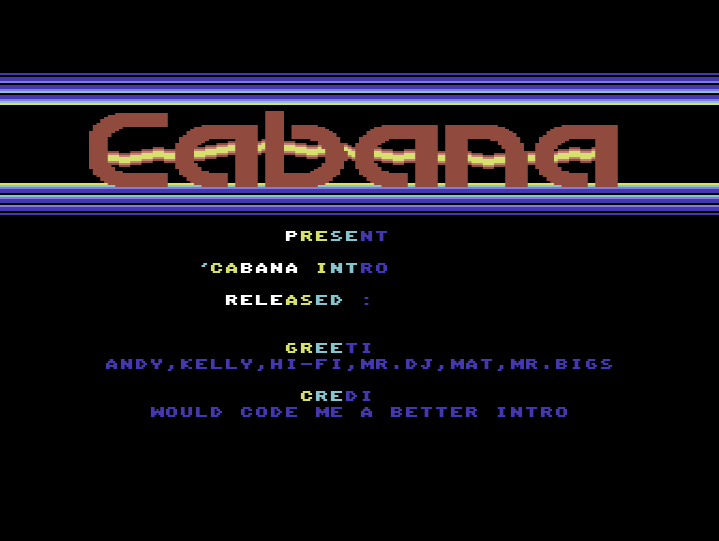 The next intro was a big improvement, mostly due the graphics that I choose, as you can see we now have a 2×2 scroller and a swinging logo.  I am not sure if the logo was drawn by deek or bizzmo, I know that 2×2 and other gfx were created by spacie of g*p. 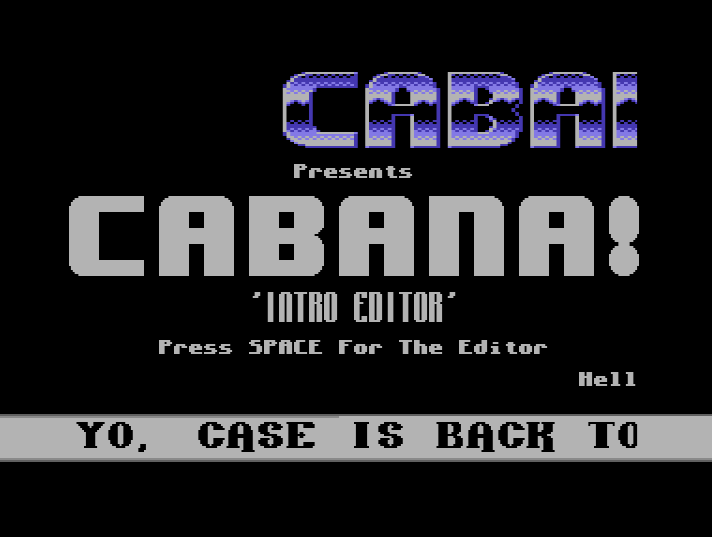 For some reason, this was called intro v3 and I cannot remember why as it was the 2nd one that I wrote and we finally had some movement on the screen, this intro also featured an editor with a very simple screen editor that I would continue to develop over the next decade.  This intro was around for a few months and used in front of several cabana release’s.

The final Cabana intro was v4.2, this one featured some single pixel raster lines that flashed and two logos that moved and a simple 2×2 scroller.  As you can see I re-used the 2×2 character set by spacie and used a 5×5 character set by Hein Designs (I think) and just cut and pasted the required characters using centuri’s logo-editor tool to create what I wanted.  By the time this intro was completed I was pretty active coding stuff mostly crap, but it was fun at the time.

Any cookies that may not be particularly necessary for the website to function and is used specifically to collect user personal data via analytics, ads, other embedded contents are termed as non-necessary cookies. It is mandatory to procure user consent prior to running these cookies on your website.